ebird.eu Trending Now
Genetic analysis of wild Scarlet Macaws from saliva...
BirdLife Middle East Photo Contest
Meet the photographer who captures the beauty of...
11 spectacular bird migration bottlenecks from around the...
Press release: Italian Recovery Plan completely ignores nature...
Breeding activity in parrots
Shot down but saved: the inspiring story of...
Fly-A-Way: the bird migration board game with an...
Meet the beautiful birds that are rebuilding Brazil’s...
Get into a Cape Verde Petrel’s nest!
Hand-fed parrots

Almost every breeder retains part of their production each year. These young, on maturity, will form the next generation of breeders. When and how these birds should be treated and then paired is an often asked question. Because each parrot group has its own idiosyncrasies it is not possible to over generalize beyond a certain point, but it is important to know the best husbandry method to insure that those youngsters develop physically and psychologically to the point that they can reproduce.

Most parrots produce multiple chicks in a clutch. The exception are single egg layers, which include Palm and Glossy Black Cockatoos. Multiple chicks increase the chances of a successful outcome. These chicks normally segue into flocks on fledging. These flocks include their parents and most commonly others of their kind. The flocks normally travel in pursuit of available food supplies. The process of learning to identify foods, evade predators, find the best roosting locations and flock cohesion is key to survival.

While this didactical experience is underway, the birds come in contact with unrelated individuals. It is in these sorties that pairs form. In species like the Yellow-winged Amazon Amazona aestiva xanthopteryx , which are easily identifiable by the color of their head and wings (which normally varies from individual to individual) I found during fieldwork conducted in the mid 1980s that within months of fledging the chicks began to display strong attachments. These birds if they survived to maturity then bred. At least this was the observation in two pairs that I could distinguish from year to year.

How chicks are treated after they wean is important. If they are hand-reared, they must segue from their human parent to becoming a bird. This is achieved by keeping chicks in same species or at the least similar species groups, which should be continuously exposed to enrichment. Filling a flight cage with fresh branches, palm fronds, some of the natural foods that they normally consume and moving them as a group around a collection replicate many of the natural behaviors. In my collection, we place the young in flights as soon as they are weaned. To these flights we add branches and enrichment.

As the young age, they are moved around; the cages are literally lifted and relocated. This action serves two purposes: it allows me to emulate nature, where the chicks move from area to area in the pursuit of food and in the process come in contact with other species (young are always kept within blocks of aviaries containing breeding adults) and it permits the birds to become familiar with the grounds. This has proved to be very important when a bird escapes. Pyrrhura conures and Amazon parrots treated to this experience almost always returned. Those that were weaned and placed in a cage that was permanent tended not to return. 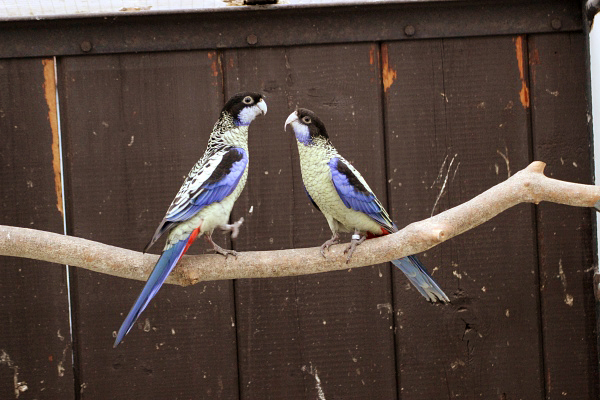 In general, Australian parrots might be very picky about their partner (c) Lubomir Tomiska

The same process can be used with parent-reared young. We tend to leave these chicks with their parents for a few months but then remove and place them in a flock. The flocks can then interact and play as they would in nature. This action also allows the young to develop individual personalities outside the shadow of the parents.

While in groups, we observe behavior closely. Invariably one bird will become the dominant individual in the flock. Its boldness will be evident by it being the first to feed, the first to approach the enrichment and the one that has the best perching site. This same behavior is seen in the wild. This individual will teach the others how to behave. Golden Conures Guaruba guarouba tend to ignore toys and enrichment. The chicks seem to focus their attention on a sibling, whose tail and flight feathers they chew. In an attempt to stop this, I started adding an adult Sun Conure Aratinga solstitialis to the group of Golden Conures. The Sun Conure immediately took the lead and its behavior was emulated by the other flock members. This is how I enticed the Golden Conures to destroy the enrichment and not their feathers.

In groups, pairs will become evident. They will feed together, tend to play together and roost together. As they age, these birds can become breeders. I find that chicks that select their future partners are the most successful breeders, displaying the best parenting skills and the highest fertility.

Understanding how to treat future breeders is key to breeding future generations of those species (i.e. white cockatoos, African Greys Psittacus erithacus, etc) whose current avicultural stock consists of wild imports. Without this effort the  level of species loss will be significant and future generations of aviculturists will have a poor selection of available species.

Q & A: “What are the most important aspects of Brotogeris parrots breeding?”

Q & A: “Which parrots are better to keep in a group than in pairs?”