History is Made! On Thursday the 8th of October 2015 I travelled to the Sydney International Airport on a very significant assignment, one that had been shrouded in secrecy and was about to rewrite the history books when it came to the legal export of perhaps the Holy Grail of Cockatoos out of Australia

A feat long thought impossible, due to Australia’s incredibly strict wildlife laws – the Legal Export of Glossy Black Cockatoos had never been attempted, let alone achieved before and many would have thought it pointless to even try. Enter two World Leading Breeding and Research Facilities; likely the only pairing that could make this possible in such a short space of time. Priam Psittaculture Centre Research & Breeding (PPC), Australia’s leading parrot breeding and research facility at one end of the Globe and the Association for the Conservation of Threatened Parrots (ACTP), the World leading German conservation NGO at the other. And so the scene was set for this very ambitious project! 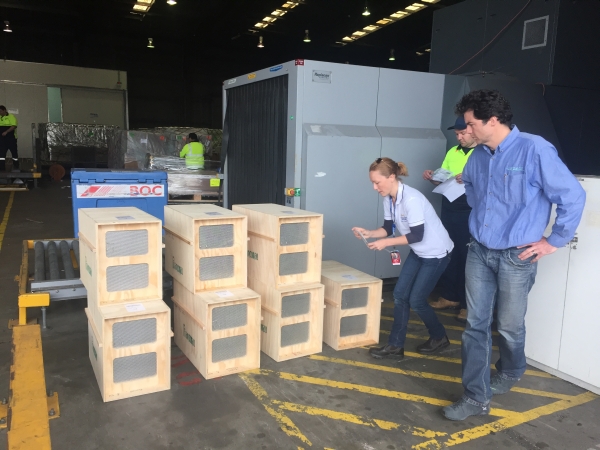 First discussed just over 12 months ago, the wheels were set in motion in April this year with a meeting held in Canberra between ACTP’s Katrin Scholtyssek and representatives of the Australian Government. This meeting proved highly productive and was the first sign that the export of the Glossy’s could in fact be possible. The high standing of both PPC and ACTP within their shared areas of expertise was no doubt very significant in getting the green light for the project, however no one involved could have ever imagined that it would be achieved in such a short space of time, with the birds landing in Germany just 6 months after this initial meeting.

The significance of such an event was certainly not wasted on me as the excitement continued to build the closer I came to arriving at the airport. Upon arrival Peter and Daniel Gowland of PPC and the familiar sound of the Glossy’s greeted me and the reality of it all began sinking in fast…..history was truly about to be made! 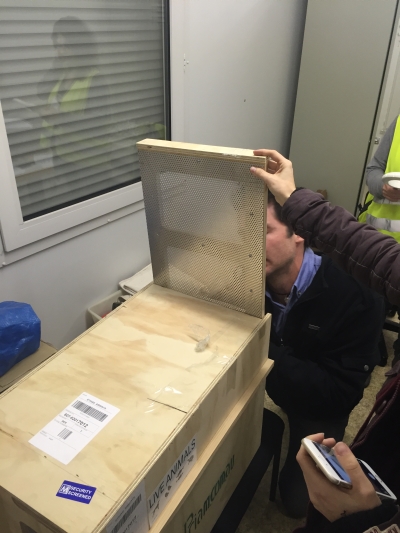 A couple of hours passed, the birds were lodged with the freighting company, the paperwork was done and all that was left to do was wait to board our flight and it couldn’t come soon enough. The time finally came and the excitement continued to grow as we boarded the Etihad A380 to make the first leg of our journey.

Some 14 plus hours later we landed in Abu Dhabi, relieved that our journey was two thirds complete. After a four-hour stopover we then boarded the connecting Air Berlin flight to complete the delivery. As we took our seats we were very pleased to be able to hear the Glossy’s calling out to each other from their custom made transport boxes as they were being loaded. Next stop Berlin!

As the plane made its approach to Berlin, the excitement began to build again in the knowledge that the time of delivery for our precious cargo was drawing very near. A very excited Martin Guth, ACTP President, met us at the airport and proceeded to drive us around to the freight terminal from where we were to collect the birds. Once there we were again able to hear the familiar and very much welcomed calls of those majestic black cockatoos, and what a relief it was!

After the required paperwork was completed, the birds checked over and microchips scanned it was finally time to load them into the ACTP van and take them to the quarantine. The feeling in the van was one of excitement and a great sense of achievement at having successfully done what no other had done before!

Seeing these beautiful birds step out of their transport boxes and into their respective quarantine cages was an incredible moment, made all the better by sight of them all immediately taking a well earned drink of water and sampling their food. As expected the flight had posed no problems for the Glossy’s and all were looking great.

This certainly has been a major achievement in the history of both PPC and ACTP and demonstrates that through sheer determination, hard work and cooperation the impossible can indeed be possible!

With the Glossy’s now safe and sound in Germany it will soon be time to look toward the next project in what is hoped will be a long and successful cooperation between PPC and ACTP – this is only the beginning, not the end!

Will ACTP breed the Glossy Black Cockatoo for the first time in Europe?

The importance of substrate for parrots at Loro...

Beginning of preparation in parrots

Preventive measures for the management of parrots at...

Will ACTP breed the Glossy Black Cockatoo for...

An extraordinary success in breeding of the Spix’s...